According to the Cecil Textbook of Medicine, 22 ed., “other than teaching manipulation, undergraduate medical training for an osteopathic medical degree (D.O.) is now virtually indistinguishable from that which leads to the M.D. degree. Osteopathic physicians complete conventional residencies in osteopathic or allopathic hospitals and training programs; are licensed in all states; and have rights and responsibilities, such as military service, that are identical to allopathic physicians and surgeons.” 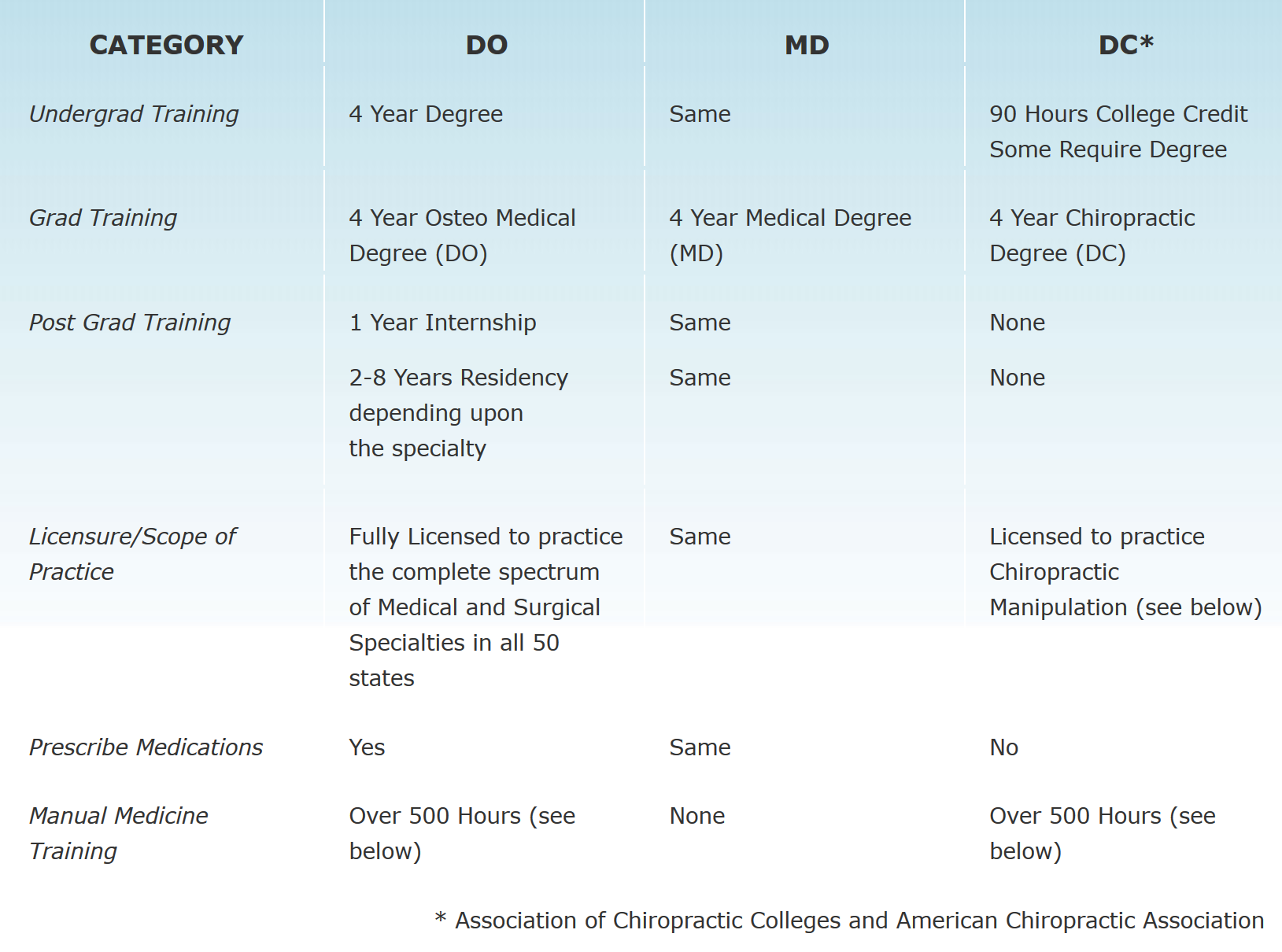 Osteopathic Medicine is based upon a science of healing discovered by Andrew Taylor Still, MD in 1874. Dr. Still based this new science upon an absolute faith in a human beings innate capacity for self healing and a belief that if the Osteopath could remove the obstructions in the system, nature would provide the healing. It was his view that what we call disease is really just an effect of an abnormality or imbalance within a person’s body. “Disease in an abnormal body is just as natural as is Health when all the parts are in place”

Osteopathic training, therefore, includes, not only the study of all branches of medicine and surgery, but also up to 500 hours of additional training in manual diagnosis and treatment. Today, there are more than 50,000 osteopathic physicians in the United States whose practices cover the entire range of specialties, such as emergency medicine, neurosurgery, cardiology, and psychiatry. More than 65% of DO’s choose primary care specialties, such as family practice, internal medicine, obstetrics, and pediatrics, as opposed to only 25% of MD’s.

A DO can also specialize in Osteopathic Manipulative Medicine (OMM) for which Board Certification became available in 1990. Certification for Osteopathy in the Cranial Field is provided by The Cranial Academy, which is currently held by approximately 150 physicians nationwide. All DO’s are required to attend and document 50 hours of continuing medical education credits each year. For specialists in OMM, advanced training is offered by various organizations within the profession.

Those doctors who utilize Cranial Osteopathy have many hours of additional training in the various functions of the PRM and its relationship to all the anatomic and physiologic systems in the Living Human System. This specialized training allows the osteopathic physician to diagnose and treat disorders and diseases in ways that are unique to this method of Osteopathic Diagnosis and Treatment.

The primary differences between an Osteopathic physician and a chiropractor are their levels of training and the scope of their practice. A chiropractor is not a licensed physician and has not completed residency training in a hospital. The scope of chiropractic practice is defined by statute as “including the diagnosing and locating of misaligned or displaced vertebrae and, through manual manipulation and adjustment of the spine and other skeletal structures, treating disorders of the human body. The practice of chiropractic does not include the use of drugs or surgery, or the practice of osteopathy, obstetrics, or any other branch of medicine”.

Chiropractic is primarily concerned with normalizing the alignment of the spine to influence the relationship between the spinal column and the nervous system. In this way, the chiropractor endeavors to influence the physiologic function of all of the organs and systems within the body. Although their techniques have expanded somewhat in recent years to include more gentle techniques, the vast majority of chiropractic adjustments are still of the thrust variety.

Osteopathic Manipulative Medicine is based upon the principle that the human body possesses self healing/self regulating mechanisms that are the source of true healing. The Osteopath is trained to discover the treatment plan that these forces have already designed, in that moment, specifically for that patient. The focus in treatment, therefore, goes beyond simple spinal alignment, to dealing directly with the abnormal body physiology using a array of direct and indirect techniques. This more holistic healthcare perspective, affords the Osteopath a broader spectrum of therapeutic options in addition to thrust techniques, among which are myofascial release, muscle energy, counterstrain, visceral manipulation, Osteopathy in The Cranial Field, and Biodynamics.

This broader range of diagnostic and therapeutic options, allows the Osteopathic physician to custom fit their treatment plan to the patient’s unique needs, respecting the fact that each of us is not necessarily meant to look and function the same way. This also means that the Osteopath does not prescribe months or years of treatment at the first visit, but lets the prescription unfold as the treatment process proceeds.

Osteopathic medicine helps relieve suffering and restore optimal body function by combining a physician’s knowledge of internal medicine with hands-on treatments to align the body correctly and activate the innate healing forces within each person.

DOs versus MDs and Chiropractors

Learn how Traditional Osteopathy can help you.